Uttarakhand Jal Vidut Nigam was formed on 9 Nov 2001 with it main motto of developing and harnessing the hydro potential of Uttarakhand State. The Nigam has 33 projects under operation with an aggregated capacity of more than 1400 MW and more than 14 projects are under different stages of implementation.

Hydro power is a non- polluting, renewable source of energy .It is perhaps the oldest renewable energy technique .Hydro power represents the use of water resources towards inflation free energy due to absence of fuel cost with mature technology characterized by highest primer moving efficiency and spectacular electricity efficiency.

Small Hydro Projects are an important, appropriate and profitable that other energy supply options.

Uttarakhand Jal Vidyut Nigam limited is primarily responsible for the Small Hydro development in Uttarakhand & is nodal agency to speed up this development.

The small hydro projects are further classified as follows

Small hydro power Projects (SHPs) are an important, appropriate and profitable than other energy supply options and is a part of the full menu of energy options to be considered in meeting the needs of rural people more so in the remote and isolated locations in the hilly terrain of the state of Uttarakhand. SHPs compares well with the alternative energy supply options and has an important niche in the range of decentralized energy supply options. This niche is tightly demonstrated defined by the availability of adequate small-scale resource and as sufficiently concentrated density of demand, consisting of a need combined with purchasing power, to take advantage of a centralized, albeit small, power plant. SHPs have a great social bearing as it can provide rural people with electricity and create a sense of belonging to the modern world besides providing energy that can assist in securing the livelihoods of marginalized people. The SHPs are financially sustainable under the following conditions:-

There is a constraint in that costs of SHPs rise with the remoteness of the location but the cost of alternative options particularly diesel generator) may rise faster. SHPs in Uttarakhand in short will play an important role as growth engines for developing the economy of rural area which is isolated and remotely located.

In Short we can say that SHP’s are

Performance and Development of SHPs in Uttarakhand

Policy of UJVNL in the construction of Small Hydro Power Plants

The SHP Plant wing of UJVNL was christened with the purpose

UJVNL for early realization of the capacity in SHP would be focusing on the construction of the projects above 3 MW and accordingly the following policies has been adopted for the Implementation, operation & Maintenance of the SHP in the State

Integrated efforts by UJVNL have steadily increased the generation of SHP after 9.11.2001 and details are given below:- 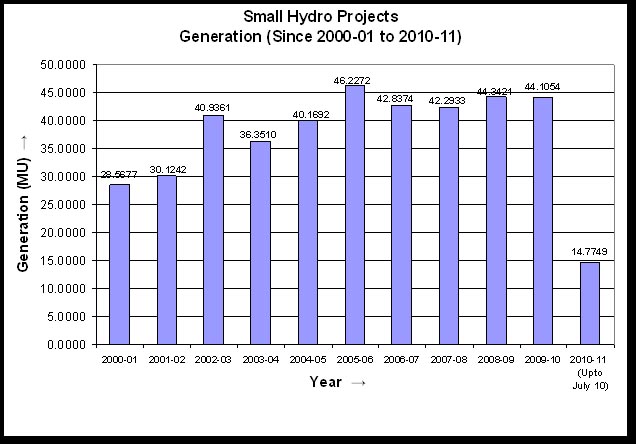 A total 121500 kW capacity addition has been targeted as under

The Setting up of SHPs in the state of Uttarakhand would help in the overall development of the state especially in the remote areas in the hills. It is a known fact that supplying improved energy services to people for the first time is difficult, supplying such services profitably to very poor people who live far away from roads and the electricity grid poses a particularly difficult challenge. Nevertheless, the access to electricity in the remote areas would generate livelihood and the impact can be spread to marginalized people and then to social activities. UJVNL is in the process of proposing new SHPs for CDM for earning Emission Reduction credits which will generate additional revenue for SHPs and make them financially viable. "It is easier to make the profitable social, than to make the social profitable" and UJVNL is aware that in planning SHP investments it is important to consider the plant for securing livelihood at an early stage and then to see how the impact can be spread to masses and for social activities. UJVNL is endeavoring to set up the SHPs so as bring about development in the remote areas of Uttarakhand there by facilitating overall development of the state.

Presently, UJVNL takes up the construction of the SHPs only after carrying out detailed survey (s), investigation (s) and engineering including cost optimization of various options. This requires collection of Hydrological and geological data besides synthesizing the same for arriving at a most economical engineering option. The entire work is outsourced to reputed agencies for timely completion besides maintaining the quality of work. Based on the past experience of the geology, metrology and the topography, safe designs have been adopted and where ever found necessary power channels have been replaced by tunnels.